Ever alert to the possibility of finding some data to play with I was interested in an article in the Times regarding the number of MP’s with scientific backgrounds in parliament. First I found data on occupations in the population as a whole here (Office of National Statistics) and data on MP’s here, published by parliament. I thought it would be interesting to compare the two sets of figures, this turns out to be rather difficult because they define occupations very differently so I had to do a bit of playing about to get them into roughly comparable form.

This is what I came up with in the end: 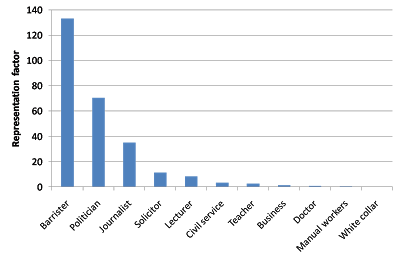 It’s a “representation factor”, that’s to say I take the fraction of MP’s in parliament having a particular occupation and I divide it by the fraction of that occupation in the general population. If that occupation is over-represented in parliament then the number is bigger than one and if they are under-represented then it’s smaller than one. It would seem barristers, journalists and career politicians are massively over-represented. Lecturers, civil servants and teachers are a little over-represented. Business people are about as expected and doctors are under-represented (along with manual workers and white collar workers).
I think from all of this the figure on doctors is the most surprising. It does make you wonder about how useful the outside interests of MP’s are in guiding their deliberations since most occupations are grossly under-represented. You shouldn’t really expect to see the House of Commons faithfully representing the overall working population, but I expected the balance amongst professionals to be a bit more uniform.
The House of Commons library document on “Social background of MPs” from which I got the MP occupation data is rather interesting, in particular the age profile (table 1) appears to be shifting upwards despite the greater youth of the party leaders. The educational background (table 7) is quite striking too.
One of the glories of the internet is that data monkeys like me can find tasty fruit to pick and consume.