The Presidents of the Royal Society (reprise) 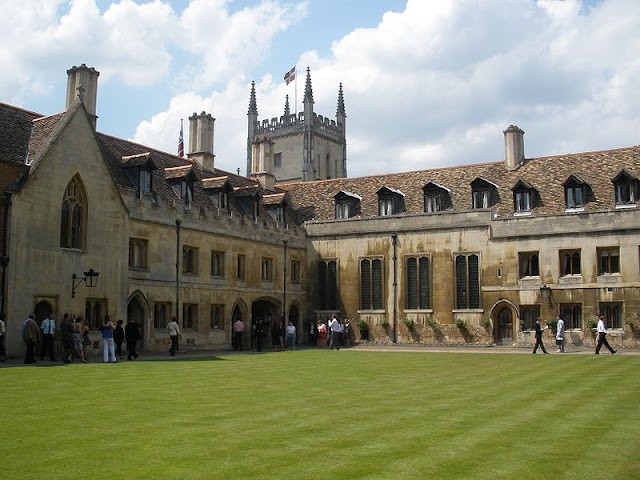 For a period in my life I knew that if I ever ended up in the news the item would have started “Cambridge don, Dr Ian Hopkinson…” because I was a fellow of Pembroke College, Cambridge.

Oxford and Cambridge universities in the UK, are structured somewhat differently from other universities. In addition to the normal university departments that you would find in any university there are the colleges. The colleges have their own independent, and in many cases, very long existence. They are responsible for the housing and pastoral care of students (and academics), as well as teaching involving small groups. In some subjects they employ full-time lecturers but this is not generally the case in the natural sciences. Each college has a mixture of fellows and students from all subjects, in some ways the parallel is with members of a club. Other universities have apparent equivalents in their Halls of Residence and ‘colleges’ although these things are actually quite different in character.

Clearly Pembroke is the best of the colleges by any rational evaluation! Whilst I was in Cambridge it celebrated its 650th anniversary, although little if any of the original physical structure remains. The college features a chapel designed by Christopher Wren, behind some panels in one of the parlours are the scribblings and sketches by the workmen involved in the building. The ceiling of the Old Library is a fabulous, intricate 17th century plaster construction, I spent many long college meetings admiring it. Alfred Waterhouse was involved in some substantial re-building of the college in the late 19th century demolishing, with dynamite, the pre-existing medieval main hall in the process.

The list of alumni is rich with comedians (Peter Cook, Tim Brooke-Taylor, Eric Idle, Bill Oddie) and writers (Clive James, Ted Hughes), a little light on scientists although it does feature George Gabriel Stokes, Ray Dolby (inventor of the Dolby noise-reduction system) and John Sulston (Nobel Prize winner). Historically, there’s William Pitt the Younger, and Nicholas Ridley (martyred by the old enemy in Oxford). The wiki page gives a summary of the history, and an extended list of alumni.

Pembroke college was somewhat different from anything I had experienced previously and it introduced me to a whole range of social gaffes. From my initial purchase of my MA gown, where I hastily thrust my arms down the sown-up sleeves rather than out through the exit slits; to confusing the Master of Pembroke, Sir Roger Tomkys, former High Commissioner to Kenya with my pointless statement that I had bought my cutlery from Argos (he thought I meant the Greek island); to turning up one summer evening in very crumpled linen for dinner only to discover that it was a celebratory meal for the Drapers’ Company and I was under-dressed by at least an order of magnitude. Fortunately, as a fellow, I was allowed to walk on the grass, the public aren’t. There are no signs to this effect, because senior fellows thought they looked untidy.

As a fellow I received little in the way of cash, I was employed by the university as an Assistant Director of Research* and paid by the college to do a few hours small group teaching each week. Pembroke mainly paid me in food, drink and company. A fairly elderly medieval scholar was the college wine buyer and did an excellent job. Dinners were particularly fine after college meetings, starting in the parlour, for pre-dinner drinks, five courses with a different wine with each course after which we returned to the parlour for port and so forth, Bath Oliver biscuits (Oliver was a former fellow) and fruit eaten with silver knives and forks.  Most junior fellows seconded to serve in the parlour.  For a long period I never drank port that was younger than I was and I got a taste for Sauternes which I can no longer support. Mrs SomeBeans has never forgiven them for the goat’s cheese profiteroles.

As part of my job as fellow I was engaged in admissions interviews: one nervous fellow (me) interviewed fifteen nervous potential students for the Natural Sciences course. I remember having wet feet for most the morning, since I’d cycled in to college in a downpour. All but a couple of the students were predicted at least four A grades at A level, ultimately we were to take one or possibly two of the group I interviewed.

The colleges go to some length to make the admission system fair in relation to the background of the student, but to be honest the problem starts well before application. A vignette: my flatmate at Bristol University went to Harrow he was one of very few in his year *not* to apply to Oxford or Cambridge (Oxbridge), to the displeasure of the masters. I, from my respectable state comprehensive, was one of a handful to apply to Oxbridge. For my school, entry to Oxbridge was not a key performance indicator, it didn’t really have the knowledge or background to support applicants.

In a way the debate on access to Oxbridge misses the point: it takes outstanding students, has excellent resources in terms of cash and people and it produces excellent output. What can you learn from this setup? As a measure of pre-university performance it’s not great, we depend on written record and a few brief interviews. A real challenge would have been to take average students and see what we could do with them.

The best thing about college was my fellow fellows: they were bright, passionate about their work, always keen to talk about it. We met for lunch: classicists, modern linguists, historians, computer scientists, chemists, physicists, biologists, naturalists, engineers, English scholars talking about our work, the world and the etymology of the swearing of the American students over for summer schools. And in the usual college way we could wine and dine in our departmental colleagues colleges where the circle widened. It’s an oddity of most modern universities that the scope for meeting colleagues from different departments is actually rather limited. The college system in Cambridge satisfies that need in some style.

Footnotes
Top image from Wikipedia: http://en.wikipedia.org/wiki/File:Pembroke_College_Cambridge.JPG
*The Assistant Director of Research is no where near as grand as it sounds, it is a position that lies between postdoctoral research assistant and lecturer and is filled in Cambridge by people who will be unrequited in their desire for a permanent position.