Bug-eyed monsters from the planet Tharg 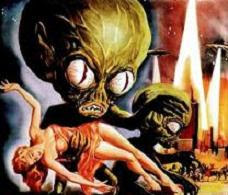 In a shameless piece of idea stealing I thought I’d write about how fiction informed my enthusiasm for science. Lucy Inglis at Georgian London started it, with her post on historical fiction had fed her enthusiasm for history. The Gentleman Administrator added his own thoughts, which are a little different. Then Jon Butterworth, a fellow scientist, mentioned sci-fi over on his blog so I thought I better get on with it before I was scooped!

Over the years I’ve read a huge amount of science fiction, from a huge number of authors but it’s always felt like something you don’t admit to in polite company. It’s always felt like a genre to be looked down upon by literary society. I think it’s the most imaginative writing there is.

Science fiction is a broad church ranging from almost entirely impersonal such as Last and First Men by Olaf Stapledon, to the very intensely human such as The Time Traveller’s Wife by Audrey Niffenegger.

I can’t resistant adding in a few of my favourite ideas based science fiction here: Brian Aldiss’ Helliconia Trilogy is about a planet with century-long seasons, and how this impacts the animals, and “people” that live on it. Babel-17 by Samuel R. Delany is a classic science-fiction of ideas: what if there were a language, the knowledge of which let you think and act much faster? The Forever War by Joe Haldeman considers seriously the problems of fighting an interstellar war with combatants “lost in time” through the effects of time-dilation achieved by travelling at speeds approaching that of light, no doubt also influenced by his experience of the Vietnam war. Against a Dark Background by Iain M. Banks is about an isolated planet, subject to civilisation for many thousands of years, whose inhabitants have never left the planet surface in contrast to most science fiction where heading off to the stars is an early achievement. Kim Stanley Robinson’s Mars Trilogy is a detailed exploration of the mechanics (and sociology) of how we might really colonise Mars.

That’s just a tiny selection of the ones I can remember, there are so many other ideas from science fiction for which I just retain fragments. In writing this I’ve really struggled to keep the number of references to reasonable levels.

The attraction of science fiction for me are dreams of where we’re heading. Science in the lab can take years to work its way out into the real world, and often the impact of any particular experiment is rather small. Science fiction leapfrogs all that tedious waiting for an effect: it gives you the future, now.

Sometimes it can be surprisingly difficult to work out the potential impact of a new technology, who’d have thought that the ability to send 140 character text messages would be such an important use of mobile phone technology? To take an older example, in the late 18th century there was an enthusiasm for hot-air and hydrogen balloons but imagining their applications turned out to be surprisingly difficult task: principle amongst the proposed applications seemed to be the idea of using balloons to lighten terrestrial loads, not lift them entirely into the air. Search around a little and you’ll find people stating that they couldn’t see any reason why someone would have a computer in their home. Science-fiction gives you permission to loosen some of the bonds of strictly logical thinking, and say “Ignoring a couple of little problems, what really could it be like?”.

There are links to the historical novel from science fiction, for example The Difference Engine by William Gibson and Bruce Sterling imagines a past where Charles Babbage’s mechanical computers really took off. And the fabulous Baroque Cycle by Neal Stephenson is set in the period around the founding of the Royal Society and features many of the scientists of the day.

Science fiction has given me dreams of living in space, around the solar system, amongst the stars, in virtual worlds, with an augmented mind, with an augmented body. As I grow older, I realise that many of these dreams will forever be unfulfilled but I’m glad I had them.