The sacking of Professor Nutt (now ex-head of the Advisory Council on the Misuse of Drugs) by the Home Secretary Alan Johnson, has been in the news today. The immediate cause of his sacking appears to have been this recently published paper which was originally presented as the “2009 Eve Saville Memorial Lecture” at the Centre for Crime and Justice Studies at King’s College in July 2009. The lecture appears to have been a policy discussion based in part on his classification of relative drug harm which was first published in The Lancet in 2007:

This classification of harm was based on assessment by two sets of experts: the first set of 29 from the Royal College of Psychiatrists’ register as specialists in addiction, the second set draw from a wider community involving members “ranging from chemistry, pharmacology, and forensic science, through psychiatry and other medical specialties, including epidemiology, as well as the legal and police services”. The basic scheme was to ask these experts to assess the harm caused by a set of 20 substances (mainly illegal but including alcohol and tobacco) on a set of 9 measures: 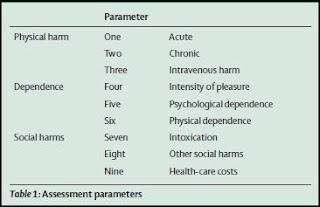 This is done iteratively using what is called a ‘delphic process’, the experts make their initial numerical assessments independently in an initial round, but can then modify those assessments once they have seen and discussed the assessments made by others. Once they have reached some pre-determined finishing criteria they combine the average scores for each area to produce an overall measure of harm. They are pre-warned of the substances in question so they can go read up on them. The rankings of the two separate groups appeared to be very much in agreement. The resulting mean harm scores for the twenty substances are shown in the following graph: 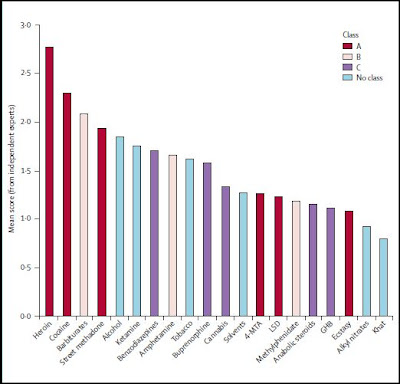 The interesting thing about this group is that tobacco and alcohol (which I’m currently enjoying in the form of fine Chardonnay) are found in the middle of the range, below heroin and cocaine but above cannabis and Ectasy. A statement which in part has earnt Professor Nutt his dismissal.

Now you could argue that “The Lancet” paper is flawed, and Professor Nutt makes suggests for improvements in methodology, but the thing is: there is no competition. Current drug classifications into A, B and C are not made on an assessment of harm based on any published or transparent criteria. If Alan Johnson wants to argue that Professor Nutt is wrong on his evaluation of the relative harm of drugs he should do so on the basis of a transparent evaluation process not because he just doesn’t like the advice he’s been given.

Though I have not focussed on it in this post, the Eve Saville lecture includes this assessment of harm along with a discussion of other issues including the media reporting of deaths through drug misuse. It does also include some support for elements of government policy on drugs, in particular he says:

One thing this government has done extremely well in the last ten years is to cut away much of the moral argument about drug treatments. They have moved in the direction of improving access to harm reduction treatments, an approach that, I think, is wholly endorsed by the scientifi c community and by the medical profession.

Update
1st November 2010: Professor Nutt has published an improved version of this study in The Lancet (pdf), the process used is a little different and an attempt has been made to improve the relative weight given to different harms. This revised study finds that heroin, crack cocaine and metamfetamine most harmful to individual users and alcohol, heroin and crack cocaine most harmful to others.